“The bottom line is, what does a player’s sexual preference have to do with her ability to play basketball?”

I wrote that in a front-page Sunday sports column on December 15, 1991 while working for The Times of Trenton. It was about Penn State women’s basketball coach Rene Portland and her team policy that no lesbians were allowed to play for the Lady Lions.

Four years later, in another Sunday column, I wrote this: 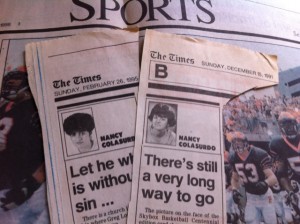 “There is a church in Philadelphia where Greg Louganis would not be welcome. No kidding.” You know, because homosexuals had “abandoned the way of the Lord.”

Back then it was mostly about AIDS and Magic Johnson and Arthur Ashe. There was buzz about whether Rock Hudson doing a love scene with Linda Evans on the set of Dynasty had endangered her life. I wrote about all of this in the latter piece.

I’m not sure why I was moved to literally pull print articles stored in airtight containers out of my personal archives (and date myself in the process) today, but I suspect it was partly about feeling a bit of pride in all of this progress that’s happening around me regarding gay marriage and, truly, attitudes around that.

Before it was the hot topic and there were Facebook photos to switch to red, I was writing about homophobia. As a sports writer for a mid-sized newspaper in the 1990s there was plenty of opportunity to call people on their tunnel vision and their use of religion to defend bigotry and I reveled in that. Maybe it feels a little jarring – if wonderful — now to be part of the groundswell as opposed to one irreverent voice in the wilderness.

I’m happy to be living in this amazing time. So much change is afoot and I find that so many in my generation have had to keep up in a myriad of ways. It is heady. On the issue of gay rights, many of us went the way of former President Bill Clinton.

“… Mr. Clinton’s journey from signing the Defense of Marriage Act to repudiating it mirrors larger changes in society as same-sex marriage has gone from a fringe idea to one with a majority,” Peter Baker wrote in Monday’s New York Times.

Yes. What he said. Regardless of our feeling back then that our gay brothers and sisters deserved the same rights as us, the marriage aspect was still fringe. In retrospect it doesn’t make much sense, but nonetheless here we are – the majority — embracing it with a feeling that it’s a no-brainer.

I’m certainly not the first to write that in 50 years this will all seem kind of comical. That we ever gave a hoot who Ellen DeGeneres was attracted to will seem silly. That loving couples as parents have to be male-female.

All of that, I think, is what makes it infinitely easier for me to bear the excruciating conversations happening all over the country right now via the Internet and otherwise. We are all hyper-sensitive and that is a vital part of sweeping change. I have seen gay people I love take exception to comments that are not at all anti-gay. I have seen conservative Christians I love express a kind of sheltered and, frankly, condescending view that has no place in decisions regarding the laws of our land. The Supreme Court is not deciding religious doctrine. Dial up the Vatican if you want Brownie points for quoting the Bible.

I wish we could all just take a deep breath and chill. I’m not about to start disowning people who are not evolving at the same rate as the majority. This is not about that, is it? I’m not comfortable getting up in someone’s grill when the whole idea here is to widen our perspective of love.

When I wrote my Greg Louganis piece back in 1995, I had just seen his emotional 20/20 interview with Barbara Walters and the footage of some of his dives. Here’s how I ended the column:

“I saw footage of one magnificent dive after another and felt my eyes get watery. I thought of the young people who viewed that splendor and were inspired to take up the sport. I thought of Greg Louganis, who detailed a troubled existence, referring to diving as his ‘salvation’ and how, right at that moment, I was witnessing one momentous save after another in the life of this complex man. I wondered if the members of that church in Philly and their ilk were watching. And I wondered if they were feeling.”

I don’t think I could express it any better now.