Shining a light on ‘Renoir’

I so love words and putting them together to share my thoughts with the world, but sometimes there is nothing like seeing someone else use their words to great effect. Director Gilles Bourdos has managed to articulate something I feel again and again and haven’t been able to express quite like this.

“When I’m in a period when I need to re-center myself, I go to museums a lot,” Bourdos told Wall Street Journal writer Ralph Gardner, Jr. 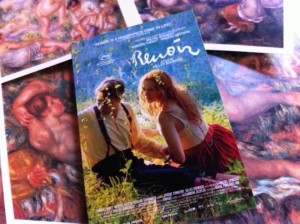 “When I come to the museum, it appeals to me on a spiritual level. What speaks to me is the genius of human beings. I’m always much calmer when I leave.”

Bourdos relayed this to Gardner as they strolled through the Metropolitan Museum of Art’s Impressionist wing recently, mostly to talk about his film, Renoir. I saw the movie at the Lincoln Plaza Cinemas this week and I assume Mr. Bourdos would be thrilled to know he left me feeling that same way upon leaving the theater. What a joyful accomplishment.

One is struck by the light over and over in the film Renoir.

Much like gazing at Pierre-Auguste Renoir’s paintings and marveling at how the light hits creamy skin or streams through tree branches or illuminates golden hair, Bourdos keeps us wide-eyed throughout this work set in the South of France.

But beneath the exquisite surface there is story, the kind laden with humanity and pain and devotion to craft. A man driven to paint so much that even racked with crippling rheumatoid arthritis and confined to a wheelchair, he is carried by a team of caretakers to his atelier or through a stream to execute his visions on canvas.

Compelled by the softness and sensuality of flesh, of bringing it from eye to brush stroke even at an ailing age 74, Renoir is pure inspiration by virtue of his determination to keep working. We learn in the film, via his son Jean, that he doesn’t call himself an artist.

I so love learning things about great creatives that make them real. We tend to make those whose work endures into larger-than-life, idealized figures instead of what they are – people just like us. They were given a gift and they chose to pay attention to it, nurture it, even be consumed by it in some cases. That doesn’t make them perfect or in possession of all the answers or perpetually happy or immune to self-doubt. They are, in fact, often more ordinary than extraordinary.

“I was a very diligent student; I ground away in the academic way … But I never obtained the slightest honorable mention and my professors were unanimous in finding my painting wretched,” Renoir once said.

Those of us who put our work out there – especially when it contains the essence of ourselves – can’t help but draw comfort from things like this. It spurs us on. There’s a mug on my desk filled with pens that says, “When I began I was like everyone else.” The folks who put that on the mug knew it would sell. It’s a universal message. By the way, the person who said it was Claude Monet.

I’ve written a few times about authenticity in art and whether the sunshine-y stuff is as moving or “real” as the raw, gritty variety. Renoir is clearly in the former camp and when you put the work in context, when you take into consideration his single focus to keep the art flowing, the way he worked through his physical and emotional pain to do it, it’s rather stunning.

“I refuse to paint the world black,” Renoir, played by the actor Michel Bouquet, says to his son in the film. “A painting should be something pleasant and cheerful. There are enough disagreeable things in life. I don’t need to paint more.”

Better for him to use his particular talent to produce works that bring us on to the canvas or make the people he paints appear to be reaching beyond it. The dancing couple seems to be in motion. The party goers seem to be inviting us into the fold. The nudes call us to lounge or reach out and touch them. They are rosy-cheeked and luminous.

In the Wall Street Journal piece, Gardner asks Bourdos if he likes walks in the woods, as he says the director doesn’t seem like much of an outdoorsman.

“[Bourdos] quoted the great French filmmaker Francois Truffaut: that he could see everything he needed to see of life and nature in movies,” Gardner writes. Bourdos tells him, “Seeing it captured in art, or capturing it myself, is almost more real than the reality.”

I know what he means. Unlike, say, Mary Oliver, whose glorious poetry is steeped and enmeshed in the creatures and plants and trees she beholds on her walks in the woods, hers and our oneness with it, there is more of an observer feel in the work of Bourdos and, in fact, that of Renoir.

It’s almost like an idyllic mini-vacation to observe right along with them.