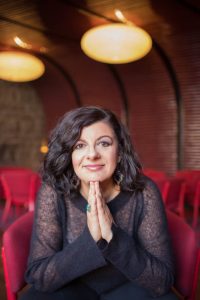 I am a journalist, blogger, author, life coach, and facilitator of creativity workshops. Over a 30-year career, I have worked in three forms of media – print, web, and television. My features, profiles, and columns have appeared on FoxBusiness.com, CNBC.com, Entrepreneur.com, Beliefnet.com, and Fortune.com as well as in Ladies Home Journal and Parents magazines. I have also written branded content for Mutual of Omaha’s Aha Moments and Airstream’s Live Riveted campaigns, both uplifting avenues to connect with potential customers.

After spending a decade chronicling the spiritual and emotional journey that changed my life, I published a memoir called Alive in the Sunshine in 2016. I am also the creator of the blog, UnfetteredExpression.com, where I craft columns about culture, travel and current events; this venture was born from a desire to throw off the filters and tap into the power of pure expression like never before. UnfetteredExpression.com was a finalist in the 2017 National Society of Newspaper Columnists contest. Those columns can also be found on Medium.com.

In 2019 I was selected to be part of a cohort of 50 Women Who Can Change the World of Journalism program through Take the Lead, a non-profit organization whose mission is to “prepare, develop, inspire, and propel women to take their fair and equal share of leadership positions across all sectors by 2025.”

I spent five years writing a twice-weekly column called Game Plan for FoxBusiness.com, where I had the pleasure of combining my writer and coach voices while also having the opportunity to delve into what entrepreneurs and creatives (i.e., Stacy London, Julia Cameron, Barbara Ehrenreich) have to teach us via their own lives. I then spent two years writing a weekly blog post for A Day Well Lived, a vibrant project with over 280,000 Facebook followers.

My journey in the communications field began at The Trenton Times, where I was a sports writer/columnist for 10 years. While there I was awarded a Knight-Wallace Journalism Fellowship at the University of Michigan and earned recognition as the New Jersey State Interscholastic Athletic Association Reporter of the Year for my positive coverage of high school athletes and issues. I also earned national recognition from the Women’s Sports Foundation for my balanced series on the prevalence of knee injuries in female athletes.

I spent the ensuing three years working as a web producer for Fox Sports and the National Hockey League and as a television producer at Oxygen Media. At the latter, I enjoyed the opportunity to focus on the inspiring accomplishments of female athletes through cutting edge programming.

My path in coaching began when, after the traumatic events of September 11, 2001, my long-dormant altruistic side led me to a volunteer stint as a coach to a 9-year-old child. Not only did I find the experience intensely satisfying, but I realized I had stumbled on to a profession that would utilize my natural ability to encourage and motivate people. So I enrolled in an intensive training program through Results Coaching Systems — a program accredited by the International Coaching Federation — and subsequently earned distinction as a certified coach.

Just weeks prior to September 11, 2001, I spent a week at The Artist’s Way Creativity Camp in Taos, New Mexico. There I gained artistic inspiration and was motivated to begin facilitating groups using The Artist’s Way, a book designed to unblock and enhance creativity. In 2003, I completed a 12-week Artist’s Way workshop in New York City with the book’s author, Julia Cameron, and poet James Nave.

As the bulk of my early career was spent in the area of athletics, I have had an intimate view of what motivates and inspires people to succeed. I listen intently without judgment and have sound, creative ideas for growth and problem solving. I get immense satisfaction from seeing people achieve their goals in a coaching partnership and find that giving them the tools to focus on their gifts is some of the most rewarding work I have ever done.

I am a member of Conversation Among Masters and The Association of Transformational Leaders (Northeast Region). In addition to coaching and writing, since 2002 I have devoted time to: doing pro bono life coaching through my local homeless shelter, coordinating cultural programs for senior citizens in Manhattan; membership in Business Networking International; forming a writers’ group; and serving on the Advisory Board for The Symposia Project, an organization whose mission is to foster personal and community growth.

I reside in Hoboken, New Jersey and enjoy an urban lifestyle with New York City just minutes away.