‘The ring of safety’

So this morning, as usual, I opened to the day’s reading in Mark Nepo’s The Book of Awakening. The entry for July 10 is called “The Ring of Safety” and in it he tells a story of watching a yellow jacket while sitting on a bench. He thought of his mother, who would have rolled up a magazine and killed it rather than live with the uncertainty it might harm her.

Eventually Nepo relays the insight of “how often we imagine things are dangerous when they are only doing what comes naturally.” Silly as it seems, it made me think of my trip to the Butterfly Palace in Branson, Mo., and my own trepidation at the lovely creatures who were swooping and dive bombing near me, but landing softly on my calm friend’s shoulder.

Nepo ends his reading today with thoughts of St. Francis of Assisi, who “held so still the birds landed on his branchlike arms, and we wonder why we are so lonely when we won’t let anything full of life come near. If we could only see the bee or the bird, or our enemy as a brief living center like ourselves, we could let them go on their way without pulling us into opposition.” 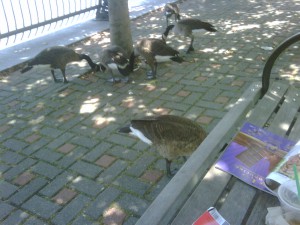 As if that wasn’t enough of a thought-provoking way to start the day, a few hours later as I sipped iced tea on a bench at the Hudson River waterfront, journaling and reading a magazine, I looked up to find about a half-dozen geese sidling right up to me. There were people mulling about, sitting on nearby benches, but it was me they surrounded with abandon.

My impulse was to stamp my feet and send them away or get up and move, but I thought of Nepo and sat transfixed. My heart racing, I slowly reached for my phone so I could take a picture (friends of mine know this is RARE). I eventually stood up so I could capture the shot you see here, complete with magazine, notebook and iced tea. They hung out for a while, but some nearby folks brought out some food and the geese went on their way.

What in the world …