Thoroughly enjoyed a terrific 24 hours jam-packed with culture courtesy of New York City. It’s hard to believe I didn’t always live a stone’s throw from Manhattan with the ability to partake in all its opportunities.

On Thursday evening my friend Robin and I saw Who’s Afraid of Virginia Woolf? on Broadway. It was my first time seeing it in any form and I was amazed by the performances and the writing. The dysfunction on parade was absorbing and hilarious and wrenching. It was interesting to read a piece on its writer, Edward Albee, in the latest issue of New York magazine and see this among his advice to writers: “Don’t strategize your feelings; just feel. Don’t write to solve your problems; you won’t.” 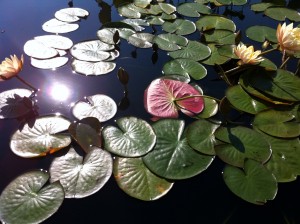 I followed this quintessential New York experience with a trip to the Botanical Garden and its Monet’s Garden exhibit. My friend Kathi and I were transported. The display of plants and flowers and trees was, of course, astounding. An impromptu tram ride felt like a great luxury, almost a mini-vacation.

But what I also loved was one particular friendship moment. We sat down for a bite to eat at the cafe and I ordered the special of the day — seafood paella. On the delicious bed of rice among the seafood were four plump, delicious mussels. As I ate them, I was taken by the color of the shells. Typically when I eat mussels or find them on the beach the shells are black, but these had gradations of browns and greens. Beautiful both inside and out.

When I mentioned it to Kathi, she noted we both had bottles of water and we could wash them off and save them. I loved the idea, especially because we were sitting at an outdoor table near some grass. As we cleaned the shells, I told her it felt good to have a friend who was a kindred spirit in this odd little venture. I took one shell and it appears I’m going to make it into a Christmas ornament. Can’t wait to see what Kathi does with hers.

Oh, the joys of a MetroCard.