A friend gave me The Untethered Soul by Michael A. Singer for Christmas. I read it today, all of it. But before I get into that, some context.

Last night, New Year’s Eve, I made a very conscious decision to be in what I like to call blissful solitude. I have happily spent many a New Year’s Eve in quiet reflection, but hadn’t done so in a while. But the last two months of the year were filled with adjustments to many of our routines due to Hurricane Sandy and the holidays. Much pain and joy and, hopefully, much growth. I felt strongly that I needed the solitude to end the year. 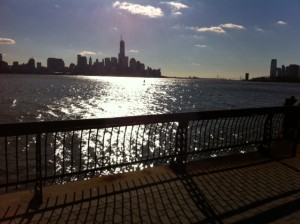 It wasn’t so blissful, though. More like restless. Weird. Off. Mixes of anger and annoyance. I was overwhelmed by the feeling of wanting the year to just go. I was done. And, it’s worth noting, I’m not one to wish time away. In fact, I frown upon it. So I went with it. Read a little, talked to some special people in my life, watched a rerun of The Sopranos where Tony told his therapist that he’d like to smash her face with a brick, watched a bit of Animal House and reveled in John Belushi smashing a guy’s guitar to smithereens during the infamous toga party.

What the heck is wrong with me? People are gushing on Facebook. People I love or at least like a lot. People who are persistently pessimistic. Gushing. Happy, happy. Drinking. Yay. Isn’t life inspiring? A fresh start. Bla, bla, bla.

What reinforced this was my cover-to-cover reading of The Untethered Soul today. As I began, I immediately thought of Eckhart Tolle’s A New Earth because Singer, the author, talks about separating the thoughts we’re having from the one who’s hearing those thoughts. The latter is the key. Simply put, the real me is the one who hears all the chatter in my head.

But as I kept reading, it was like a review of all I’d learned in two life-altering places in my life the last 15 years or so — therapy and a New Thought church in Manhattan I attended regularly for several years. Parts of it also reminded me of an exercise I created to help clients; it involves writing an honest dialogue between their artist self and inner critic to see what emerges. Much of this is about how awareness of these separate ‘voices’ in our minds can transform our lives.

Because of just having the experience I did last night, this passage really spoke to me: “Becoming familiar with this pain is part of your growth. Even though you may not actually like the feelings of inner disturbance, you must be able to sit quietly inside and face them if you want to see where they come from.”

I know how to do that now. Let’s take it a step further. I’m sitting here writing about them publicly. I’m not going to bury them so they can come back and screw me over later. No, no. “… if you relax instead of closing, it will work its way through you,” Singer writes.

As if to validate all that came up as I was reading the book, near the end came this: “No discussion of living life as a spiritual path is complete without addressing one of the deepest of all spiritual teachings, the Tao te Ching.” An entire chapter about the very book at the center of what I’d learned at the New Thought church. Gorgeous.

And then this: “This is how you know something about God. You become one with Him. Ultimately, the only way to know about God is by letting your being merge into The Being, and then seeing what happens to you. This is universal consciousness, and the qualities of the beings who have attained this deep state are similar in every religion.”

Yes. This is at the center of what has driven me the last decade or so. What Singer calls identifying with Spirit more than form. It is not some la-la land state of being experienced 100 percent of the time. It’s more the default place that took a lot of work to reach, work that continues.

“You don’t claim to understand what is happening to you; you just know that as you go further and further back, it gets more and more beautiful,” Singer writes.