It is time. You can feel it, can’t you? The old, dusty walls, in their own way, are crumbling down around you and leaving gaping holes in this Church of yours.

All metaphor, of course, for a much more immense structure than any physical building. Your Church’s jig is up. If you try to patch those walls over with more trumped-up authority and arrogance in the name of God, it will be too obvious. We already know. Your hideous secrets are out. 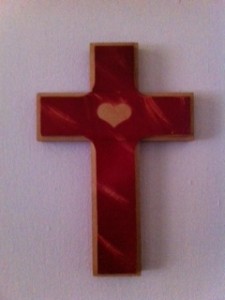 What we didn’t know or fully grasp was horrifically filled in by the film Mea Maxima Culpa: Silence in the House of God  that premiered worldwide on HBO this month. I kept watching, dumbfounded and sickened, and kept thinking it couldn’t get any worse. And it did. Each story, each man who’d been molested by a priest or elder of the Church, each coverup, each example of complete lack of compassion for victims, each dirty layer revealed. Each and every country, diocese, school, individual that opened their wounds only to be slapped down or made to feel like a traitor by those at the highest level.

Despicable. It made what happened at Penn State look like Ferris Bueller’s Day Off.

Believe it or not, Your Holiness, this actually makes your job easy. Yes, that’s right. Easy.

What’s hard is denying, covering up, playing fast and loose with what “sin” is and ignoring truth for the sake of surface. Do you know how much more markedly difficult it is to construct a web of lies than it is to show compassion, minister to the needs of the flock, and do God’s real work? And since money talks, imagine the cash coming into the coffers from people who actually understand God’s messages if you start trotting pedophiles in your charge off to jail instead of moving them around and rewarding them.

Easy is one of your confidantes coming to you and saying, “Your Holiness, we’re having a problem with Father So-and-So” and you, without even blinking an eye, replying with authority, “Let him stand trial and be judged by his peers.” One offender after another for, as one line in Mea Maxima Culpa goes, “A pedophile is not a sinner; he is a criminal.” Stop designating millions of dollars to cover legal fees and provide hush money. Just stop. Easy.

Have standards, for Pete’s sake.

To be honest, Your Holiness, I’m kind of baffled as to why I – a life coach and journalist – have to explain to an institution like the Vatican that there should be exemplary morality within its walls. It is up to you to give people hope that that is possible. The last decade has clearly demonstrated that many Catholics will not leave the Church, ever. Others were already long gone for other reasons more related to doctrine. However, there is much loyalty there and that is now in your care.

Let me emphasize this: There are Catholics all over the globe who derive joy from and feel connection to spirit through the Church and they deserve your loyalty now. Their faith has helped sustain this massive business you’re now running. Many of them are in denial over the scope of this predatory sexual depravation that’s been going on because it’s all too much to digest. They’ve got enough problems trying to keep their jobs and raise families and your Church is the place they turn to soothe themselves and pause for prayer.

You work for them, Your Holiness. You owe them.

I fervently hope this position of leadership you’ve accepted isn’t about the power trip. Fine, exalt in the reverence people have for the Pope. Spreading good will and love is part of the job description. But stop short of looking the other way for the good of the criminal that found his way into your cloistered world and call him out on his crimes. This does not weaken the Church, it strengthens it.

Goodness, if you don’t get this by now I almost don’t know what else to say. Every day, it seems, there is another new book enlightening us about spirit and the divine and the possibilities of this universe. These accounts are always infused with light and love and a sense of God’s eternal presence.

It is pretty clear to me, whether God exists or not, that we were put here to love. Your job is to lead in that realm, whatever that means to you. So many of us hope you accept that assignment with grace and humility and a mission to heal.

I’m not optimistic that you’ll be able to penetrate the old guard in that beautiful palace adorned with the most breathtaking art. I can’t help but think of those artists, surely flawed but also awed by the idea of expressing themselves in divine language on the walls and ceilings of that magnificent house.

This is the Church’s call to live up to its own aesthetic grandeur.