Butterflies and the Creator

It wasn’t planned, this day of mixing spirit and science. It just happened.

My friend Kathi and I set out for the American Museum of Natural History (AMNH) to see the Butterfly Conservatory exhibit. We wandered through the tropical little enclosure as they flitted and swooped around us or simply blended into the plants that filled the space. 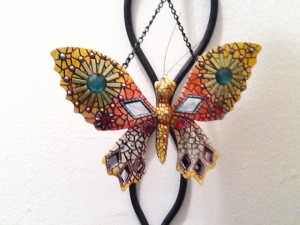 As I gazed at these light creatures, from the speckled to the solid, the almost woven-looking wings of some and the more papery of others, I kept thinking in divine terms. Each one so perfect in design and engineering. Delicate and discerning. Some looked manic, others peaceful.

I am admittedly a bit jittery when they swoop, but I slowly made my way through, letting my eyes drink it all in. Kathi pointed out the blue morpho ones, which were so gorgeous and captivating I was happy to later read they are said to signify joy, happiness and even luck.

We made our way to some of the permanent exhibitions, first the Hall of Reptiles and Amphibians. Going from an enormous alligator to a tiny lizard and seeing the intricate aspects of how they hunt or reproduce I just kept saying, “How could anyone question the existence of a Great Creator?” It was a bit jarring to feel the escalation of my spiritual response as we continued from case to case of frogs and lizards and snakes.

I hadn’t been to this museum in over a decade, so I also had a hankering to see the famed blue whale. Dwarfed by the 94-foot long mammal, I was hit immediately with this – we are specks in the Universe. Somehow there was comfort in that, being a miniscule part of a much, much larger production.

The folds of the walrus’ skin, the thick fur of the polar bear just kept reinforcing this notion for me. I am in a place of great transition in my life right now, so perhaps that accounts for why each phase felt like a heightened experience. Attention paid to every blessed thing – what a rush.

We left the museum for a late lunch at a nearby French bistro. Sitting in a booth in the bar area, we saw on the television that there was an animated crowd at the Vatican and that just-elected Pope Francis was speaking.

Science to spirit within the span of an afternoon.

This spiritual moment in time came with the pageantry of smoke and embroidered robes. Euphoric people celebrated the historic day, unspoken hope that something in this institution will shift, that Pope Francis will bring open eyes, open ears, open heart.

And the Francis, oh the Francis. I sit here writing this with a laminated St. Francis of Assisi card propped on my computer. It is always there, reminding me to focus on understanding rather than trying to be understood. What a fitting message and mission for this new Pope.

“Like a life-term prisoner who wakes up one morning to find he has been pardoned and is free to leave his dank, dingy cell, Francis made a sudden break with his past and the cares of this world when he embraced his new life of service to God and humanity,” writes author John Michael Talbot (with Steve Rabey) in The Lessons of St. Francis.

It feels special, this Francis thing.

In retrospect, the fact that St. Francis of Assisi is the patron saint of animals brings me back to that feeling I kept getting at the museum. We – living, breathing beings — are all connected. We have a responsibility to look out for each other. By virtue of choosing this name, perhaps Pope Francis gets that.

The most aware among us, I think, see not just the connection but the complete and utter melding of spirit and science. There is no division unless we create one. These words from Albert Einstein in The Writer’s Almanac the day after our museum excursion resonated in a new way:

The challenge before all of us – not just this Pope – is to answer the call to doing our part, to paint our own wee corner of the world so that when we’re done it looks like the most magnificent butterfly wing. Or at least I like to think of it that way.

Talbot wrote, “In everything created, Francis saw the handiwork of the Creator.”

Suddenly, miraculously, I’m seeing it, too.