The concrete and the divine

Contentedly snowed in last night, I was watching Bill Maher when he and his guest, Lawrence Krauss, laughed uproariously at the topic of a Newsweek cover about Dr. Eben Alexander’s book,  Proof of Heaven. Without even a glimmer of openness to anything Tina Brown feebly offered in response, the theoretical physicist, cosmologist and professor of physics and the show’s host went in full stereo on the absurdity of science co-existing with religion/spirituality. 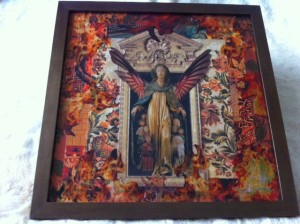 Believing religion to the exclusion of science is ignorant, to be sure. And choosing to not have a spiritual dimension to one’s life is certainly a pragmatic option. But to belittle the idea that there is a spiritual realm, that one cannot fully support evolution and all science has to tell us and still believe in angels and an after life? Why the mocking tone?

I don’t know for sure what happens when we die. No one does. The topic intrigues me, though. I can’t see living life like there is some kind of points system whose highest reward is heaven.  But I am open to the possibilities of what happens when we leave this life. Seeing two intelligent men, even one as anti-religion as Maher, being so dismissive of Dr. Alexander’s experience was jarring. He was, after all, on the same facts-only page as Krauss and Maher prior to having the life-altering experience he shares in his book.

I have happily spent a second snowed-in day absorbed in Lorna Byrne’s memoir, Angels in My Hair.  Byrne has seen and talked to angels since she was a baby. Is it not worth suspending disbelief to take in the experience of another human being with full force?  Even if that experience is so foreign to our own and requires expanding our minds and souls? Isn’t that what makes us feel gorgeous and alive?

Sometimes it’s about letting ourselves go to a place where butterflies and feathers flit and float and light infuses bodies of water and nothing can be explained away with logic. It’s a possibility as told to us by fellow human beings. It doesn’t disqualify the scientific findings of other fellow human beings.

We can be open and listen. Surely that is no less intelligent an option.