I’ve never watched the Kentucky Derby. Never paid much attention to it, really.

But it’s a safe bet I’ll be watching this one because I’ll be cheering on jockey Rosie Napravnik.

It makes me feel a little predictable, rooting for someone mostly based on gender and, well, the fact that she is a fellow Jersey Girl. But I can’t help myself. This stuff lights me up. 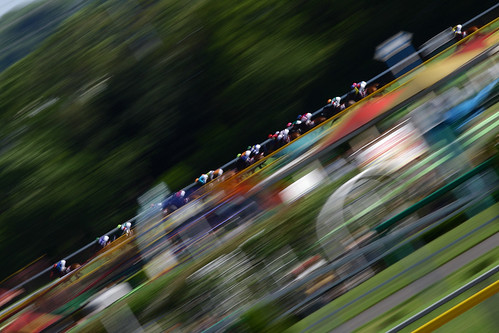 Sometimes when I look back on about 15 years of covering mostly women’s sports earlier in my career, I wonder if I wasn’t partly drawn to people doing something I was never comfortable even trying. I was lucky to get a ‘C’ in gym class. So completely uncomfortable in my own skin.

Then, there I was, day after day on fields and in arenas watching female athletes run, jump, pass, block, spin, shoot, bat, field. It never got old. I never looked at it as an opportunity to be inspired every day, but in retrospect I’m sure that was a big part of the allure. Those young women were teaching me about sweat and competition and trying harder next time.

Since my job was to chronicle their experiences, the more I let in, the better. The deeper I felt the disappointment or the elation, the better the story would be. People wanted me covering their events because they knew I got something that went beneath the score and stats. I picked up the undercurrent, the joy of the player coming back from injury, not just the fact of it.

And covering female athletes almost always had the feeling of underdog. The fields were often not as nicely groomed as the ones the boys played on. The funding was less. The attention they received frequently paled in comparison to their brothers in the same school. They didn’t whine; they played. And back then, their brothers were starting to see that, hey, my sister puts in just as many hours as I do. The boys were starting to get it.

It was an exciting stretch to be writing about pivotal times for girls, filling their scrapbooks with clippings (yes, paper ones) and even occasionally speaking at their banquets. They were so grateful.

These days I pay little attention to sports, but 60 Minutes just did a piece on Napravnik and I liked how she came across – direct, confident, smart. Those qualities are not hard to find in Jersey women – damn right – and as I watched I felt represented. Yeah, Rosie. Let’s see what ya got, baby.

When she was relating to Bob Simon some of the finer points of communicating with horses and she said they responded to a “smooching” sound to burst forward, he asked her to make the sound.

“I’m not going to make that noise on 60 Minutes,” Napravnik said.

Translation, Bob: Yeah, right, with all that I’ve got to prove and with all I’ve accomplished so far to earn respect, I’m going to dish up a clip that can be spliced and diced into some sicko sexual montage on the Internet. Didn’t I mention I’m from Jersey, Bob? I’m wise to that. But nice try.

Not to make Simon sound depraved. It was done in fun. And to his credit the moment really captured Napravnik’s personality. She’s getting in there again. Storied Churchill Downs awaits. Last year she won the Kentucky Oaks on a horse named ‘Believe You Can.’ Could a life coach even make that up?

This reminds me of turning on the Masters for the first time in 1997 just to see what this sensation Tiger Woods was going to do. He cruised at Augusta and made history. It also brings to mind the few NBA games I saw last year because a little thing called Linsanity was happening courtesy of Jeremy Lin.

Every so often it’s nice to see someone ‘different’ emerge on the scene and take a sport by storm. You know there are already girls who want to be Rosie Napravnik. She’s taken them closer to believing it’s possible.

Heck, a bunch of us adults are paying big attention, not because we want to be jockeys but because we want to be something that we’ve been told we can’t or shouldn’t be. These people who just shrug off the naysayers and keep going, who get injured and heal and get back out there, we happily go on a little ride with them. Even it only comes in the form of screaming at the TV and raising our arms in the air.