I despise talking about all things medical. Truly can take about three minutes of it before I glaze over and don’t hear anymore. I tend to want to just take care of things and not dwell.

So, yes, I am way over talking about my left knee. Thought to possibly be a sprain in the E.R. three weeks ago, tests now show it is a medial meniscus tear. When the orthopedist started off with the words “bad news” yesterday, all I heard for a few minutes after that was that treatment involved “going in” and “six weeks on crutches” and I felt my lower lip quivering. And then my thoughts went something like this — “No, no, no, no, no, no and absolutely not.” 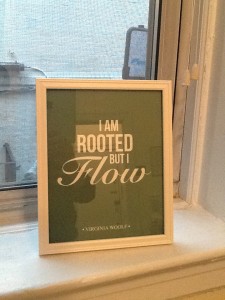 But then the doctor talked about how some people have no symptoms with these tears and they only get discovered when they’re doing an MRI for some other issue. To me, that was like a pinhole of light into my dark little cave of worry. I sat up straighter on the examining table and listened better. I explained that since being off the anti-inflammatory meds for over a week, I now had an exact movement I could describe as troubling.

He asked me to show him. Much to my surprise, it hardly hurt at all. He asked if I could do a squat. I looked at him like he was asking me to bungee jump, but I slowly tried and it felt OK. Then I was compelled to put my leg up on the examining table while I stood on the floor to see if I could handle the stretch and he encouraged me. It was fine.

“I’m not impressed by your level of pain,” the doctor said.

Golden words, but they brought something to light — now it was less about not being able to move but more about my fear of doing so. I babbled about the recent 60 Minutes piece on the placebo effect and how it made me realize my own power in my recovery. I also realized that for someone who works out four days a week and does yoga, the soreness in my knee is now partly due to stiffness from mostly sitting for three weeks.

I left with a prescription for physical therapy, which begins next week. When I got home from the doctor’s office, loving and diligent inquiries on how I’m doing started coming in and I realized I was in a state of overwhelm.  So much fear had gripped me over this and  it had all backed up on me. I felt like if anybody tried to cheerlead me yesterday I would have gone through the phone and killed them with my bare hands, so I poured myself into work. (Although I must admit to cracking a shadow of a smile when one friend wrote, “You’re an athlete.” I wanted to shoot back, “OMG, really?” Another pinhole.)

I also began to realize that, from a metaphorical standpoint, I am supposed to be paying greater attention to my foundation. To plant my leg better, but also to get more secure footing in my financial life. Since rebuilding my finances after hard times, I am proud to be debt-free, but an important next level has to happen. I must strengthen myself before trying to run ahead by leaps and bounds. A major shift in mindset and my actions are already beginning to fall in line.

Today I am taking deep breaths and I am more welcoming of concern and love. I received a package in the mail from my treasured friend Erin. She had seen an earlier post about how I removed something meaningful from my kitchen wall and so she sent along something (see above photo) that made her think of me. It says:

I am rooted but I flow. –Virginia Woolf

That is precisely right. For always, but especially now. And it’s Virginia Woolf, for God’s sake. Yes, yes, yes, yes, yes and abso-freakin’-lutely.